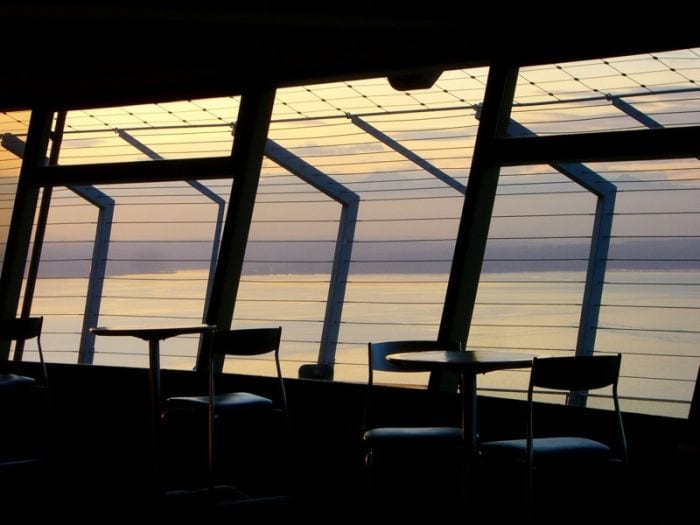 Jeremiah from Chaos on Wheels asked AJ and I to do a stunt show at a Franklin Graham event just outside of Seattle, WA in Tacoma. I was super excited to do this, I have never been out that direction and I love doing show and riding bikes with AJ. We flew out together and I was just amazed at the scenery out there. It was beautiful everywhere we went. We did 2 twenty minute shows, inside of the Tacoma Dome with a crowd of about 9,000 people. This is the most people I’ve ever ridden in front of, and AJ and I put on some damn good shows. At one point I was asked to give out a BMX bike to anyone in the audience, so I rode the bike on top of the ramp and let AJ 360 over me. I then rode the bike around the stadium while the crowd cheered for me to give them the bike… I remembered a kid earlier in the day that asked for my autograph and was super excited about being there so I rode over in his direction and picked him out of the crowd. He was ecstatic, the kid went nuts. He ran down and hopped on the bike and seriously took off and rode around in front over everyone, wobbling all over and trying a surfer type move where he stands on the frame of the bike. This was not planned, and he looked like he was about to crash, lol so we called him back over and got him to settle down. Anyways, the shows went well, but AJ and I also took a day trip out to downtown Seattle and took some photos. It was incredible out there… My good friend Alex Mehl who I used to work with at QBP (then moved to Portland to work for a vendor of ours), came out to visit and watch a show of ours. It was a great quick weekend, and I hope to someday make it back out that way.