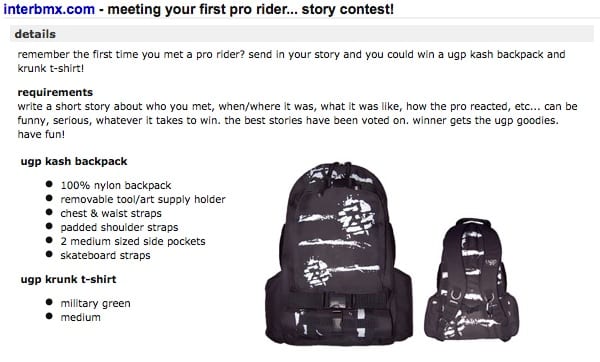 So I put on my first InterBMX.com contest… It’s A STORY CONTEST lol supported by UGP! Bryce from California won.. Here is his entry that received the most votes.

“The 1st pro I ever met was Davey Watson and it was not too long ago. I just recently got into the sport and have been riding w/ some friends who have been doing it for a couple of years and we went to go hit up the school we goto, as we went through the gates we where messing around on an oversized 3 not to far from the gate and a few bikers showed up that none of us knew and one of them emedietly looked at a huge 15 stair as he came in and the others ended up being ok riders but they all had cameras w/ them but the one guy who looked at it 1st try did a switch ice-pick down it. And we went over there and started talking to him to our suprise it was Davey Watson. We ended up riding all day w/ him at our school and it turned out to be a pretty awasome day of riding to get to meet a pro and the fact that he was so down to earth and actually like chill to be around instead of just out to ride and he ended up helping all of us out perfect and learn a few new tricks. Over all tho Davey Watson to me was the 1st pro I ever met and again it was only about a month ago and meeting him was the kind of thing that inspires kids to go out and ride and go big because in the end where all doing it for the same reason. We love to ride.”