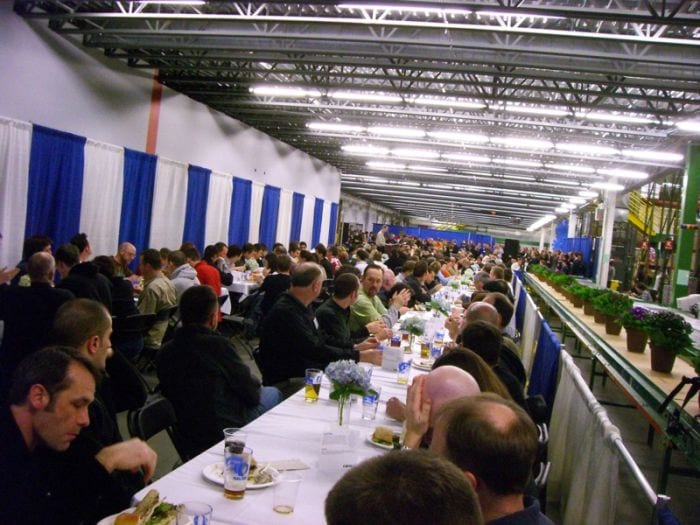 It’s crazy how quick trade shows come and go… This year I picked up Erik from Drive up at the airport on Friday afternoon. He wanted to see the 35W bridge collapse so we swung downtown on the way to QBP. This year we had one full row of all BMX vendors, including Eastern, Odyssey, Sunday, Beloe, Formula (?), Profile, Answer, Drive, UGP, Demolition, Volume, Duffs, and Stolen. Lots of vendors… The BMX dinner on Friday night had more people than we’ve ever had in the past. We kind of had our own area at David Fongs. After dinner Todd and I took Eric and Chad Degroot out to 3rd Lair. They said they weren’t busy, although there were like 50 skaters when we got there, including a few friends of my brother, Pat and Zach. Saturday was definitely a long day. QBP from 8am to about 9:30-10pm. Definitely not all work, well, unless you consider work playing in a Counter Strike LAN party. It was awesome. Saturday night I went to the Surly party out back on the pond behind Q, had fun watching a dude enter the Pugsly race in about 0 degrees with no shirt on. I was pretty much sick this whole weekend as well. Sunday arrived, and basically I talked with some people, played some games, help clean up, and sleep. This is the one weekend that we have to work each year. Also, I still have my dried up flowers on my desk that Ben gave me from last years Frostbike, which was originally from the Pedro’s girl.

Oh, and don’t be surprised when there is an IT LAN party going on behind the scenes 😉