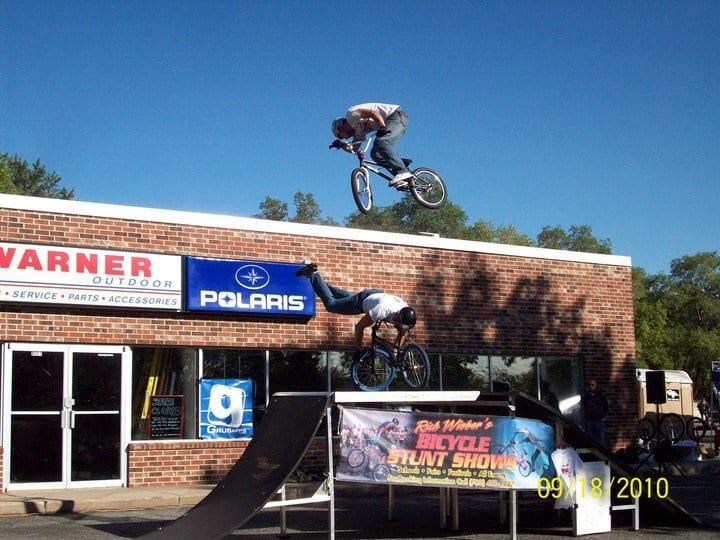 After a solid 8 years of doing BMX shows, this year I decided to book my first show. Special thanks to Dennis for introducing Don & I. Don is part of the planning team for a new event in Bloomington this year, called Bloomington Heritage Days. We’ve been planning this since February. The turnout was great, perfect weather, large crowds, etc. However in our second show, my roommate AJ who was doing the shows with us happened to go down after a superman, it was crazy cause I was ready to follow behind him and it looked like he landed perfect. All of a sudden I was flagged to stop riding, I go around to the other side of the box and see AJ face first on the ground. (Here’s the thing.. I’ve known AJ for years, we call him Ironman, he’ll take the hardest slam like Mike Tyson just TKOed him to the cement then walk it off like no big deal.) AJ was knocked out cold and missing teeth. You could say his name over and over and you’d get nothing. Just breathing. End of show. He finally woke up and walked off. Ambulance showed up took him away to Southdale Hospital where his girlfriend Shawna met up with him. Rich & I ended up finishing the last show ourselves, then my mom & I cruised over to see AJ. He ended up with a few stitches & needs some dental work, otherwise Ironman as usual. Special thanks to everyone who attended and made this event happen, looking forward to next year!