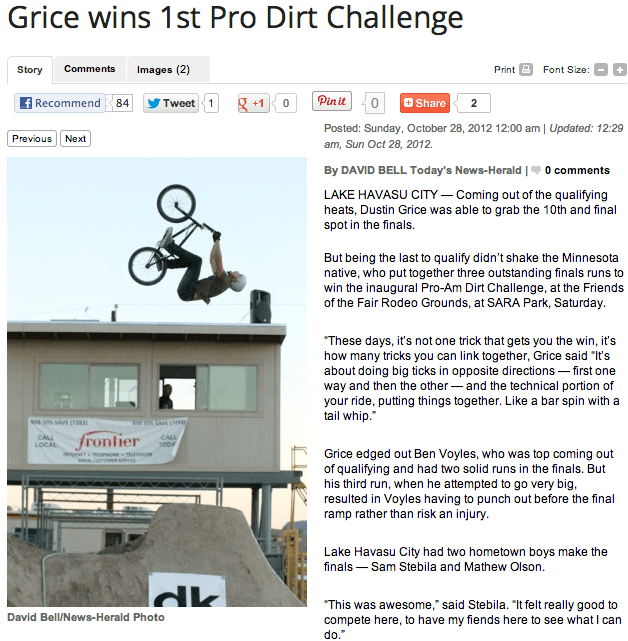 LAKE HAVASU CITY — Coming out of the qualifying heats, Dustin Grice was able to grab the 10th and final spot in the finals.

But being the last to qualify didn’t shake the Minnesota native, who put together three outstanding finals runs to win the inaugural Pro-Am Dirt Challenge, at the Friends of the Fair Rodeo Grounds, at SARA Park, Saturday.

“These days, it’s not one trick that gets you the win, it’s how many tricks you can link together, Grice said “It’s about doing big ticks in opposite directions — first one way and then the other — and the technical portion of your ride, putting things together. Like a bar spin with a tail whip.”

Grice edged out Ben Voyles, who was top coming out of qualifying and had two solid runs in the finals. But his third run, when he attempted to go very big, resulted in Voyles having to punch out before the final ramp rather than risk an injury.

“This was awesome,” said Stebila. “It felt really good to compete here, to have my fiends here to see what I can do.”

“This felt amazing. There was such great support from the community,” Olson said. “I think not only could the city benefit from an event like this every year, this facility is perfect. And Lake Havasu City is a youth-oriented town; this is a positive for the kids, for the parents and the community. So I’d love to make this an annual event. The other pros I’ve talked with said they’d love to come back.”

Riders faced a pair of challenges, especially during qualifying. First was a stiff breeze that made some tricks extra challenging. And the second was the setting sun hitting the eyes of riders as they crested the final ramp.

“But for a first year course, they did an amazing job,” said Jake Kinney. “We were able to ride in the wind. You could see, the guys were able to bring out everything today. This worked really well.”

Professional BMX rider Richard Laguna, who has had shows on MTV Tr3s and MTV Latin America, said he jumped at the chance to host the fundraiser event for the Tinnell Memorial Skate Park.

“When they approached me in Las Vegas, they told me Pat (Tinnell’s) story and I said when can we begin,” Laguna said. “I’ve seen the whole community come together for this, to help get that park built. It didn’t matter what was needed, someone got it.

“It’s like a family here in Lake Havasu City,” he continued. “And not just the city, they’ve treated me and all of us like family. I’m honored to donate my time to this project.”

Grice said he was also moved to join in since the community’s effort is similar to one he spearheaded in Minneapolis-St. Paul.

“We did the same thing in the Cities. It was just a bunch of riders that wanted a place to ride, so we got together and found a way to build our own park,” Grice said. “So I’m happy to help out build this park.”

In the amateur competition, Lake Havasu City’s Tyler Kowalski and Mesa’s Tyler Powell both finished with a score of 90 and it was Kowalski taking the win on a tiebreaker.

Another Havasu rider — Austin Sweet — finished third with a score of 85.