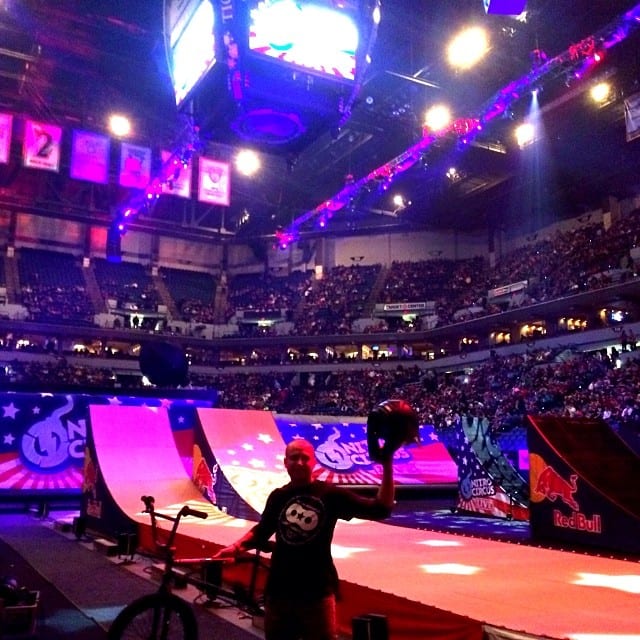 Words will never describe what it was like to perform in Nitro Circus. Not only the event itself, but the intimidation and horror of Rolling down that massive roll in and hitting the 40 and 50 foot gap jumps. Huge thank you to Jon for hooking this up, I was the local boy from Minneapolis to ride in the show at the target Center. I will tell you what it was like walking up that rolling for the first time. It was huge, step-by-step, there must’ve been 100 steps. I followed up a few riders and finally made it to the top. I was already tired. We were so high up, it must’ve been four or five stories tall. A handful of other riders were also now at the top of the roll in. There was no music. Only intimidation. One rider simply rolled down the massive roll in. No big deal. Next rider dropped in. It was soon going to be my turn. One thing I’ve learned with BMX and writing contest and big droppins, do not think about it. The longer you think about it the harder it will be to do. I was up next. I was told just flip it first time, Do not straight jump it, it is that much more scary. I rolled in. The speed began to increase. I was halfway down the rolling and flying. Three quarters of the way down the speed really starting to increase. I forgot how fast it was after the last time by Road mega ramp at Woodward West in California. It was insane. I got a flat bottom and was going so fast my heart dropped. But I didn’t have time to think about that. I hit the jump, leaned back, and started looking up at the rafters. I waited a second for these slow backflip over the 40 foot gap. I’d them tilted my head up as I was upside down and I saw the landing. I came down and landed perfect. Then I was flying into the massive airbag to slow everyone down. I couldn’t believe it. I have just jumped the nitro Circus ramp first-time and back flipped it and I landed. I ran back up the rolling and landed it again. I did it about two more times, and then back flipped the 50 footer even faster. Then I was told I should street jump at once, so I did. It was the scariest thing ever. I couldn’t believe it. I jumps the ramp six times in practice, And then was asked if I would like to perform as the local kid from Minneapolis. I didn’t even think about it. I said “of course!”. The show began. I didn’t even know what was going on in the actual show, I was just waiting for all of my cues and went to go. It was crazy because all of their jumps are in a train. You literally try all of your tricks in a Train. But it is crazy because if you do fall you are going so fast that you just slide out-of-the-way. I jumped the ramp four times in the show, One of them was even a backflip cancan tire grab. And then we got to the big tricks, I decided I wanted to try the backflip windshield wiper, a whip to whip back the opposite way. I have never done this trick, Only a few others have, But no one had done it on the nitro ramp yet. I sent the backflip did the first whip, and then got the second whip back around, but then over rotated the backflip and fell. It was the first time that I fell on the nitro ramp, and my butt killed! There was too much adrenaline though, I ran back to the stairs and went back up for the final finale train. We all landed, Ran to the top of the landing, fireworks shot off, and we all celebrated. It was an amazing show. Thank you so much again Jon, everyone at Nitro, and all of the fans that were there. I had so many local friends in the crowd, it was truly one of the greatest moments of my life. 15 years in the making. Thank you NITRO CIRCUS!