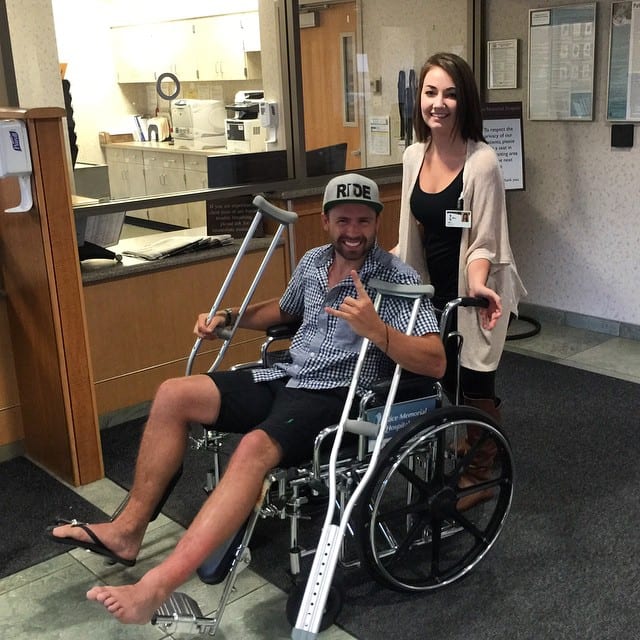 Where to begin with this one. It took me nearly 20 years for this to happen riding bikes. This year was the year of triple whips. I was doing them at every show, I couldn’t believe it. I even started doing 360 triple whips. It was insane. I was trying to get other riders to start doing triple whips as well. I told Trevor, if he does a triple whip, I would try a quadruple whip. He’s still wouldn’t try it. After about a month, he finally did. And he landed it. I couldn’t believe it. And then I remembered that I said I would try the quadruple. So I sent it. One whip, two, three, four… I had almost gotten the fourth one around, And then I slid out. No big deal. I got up to try again I was so close. I knew I could do it. I started cranking at the ramp again. One whip, two, three, four… I started to put my foot back on the pedal. And then all of a sudden my foot in the bottom of my leg completely rolled. I just didn’t have enough time in the air to get back on that pedal. I was laying there on the landing in front of the crowd. It hurt, but I didn’t think I had broken my leg. My friends slowly trying to help me get up and I was carried away to under the ramp. The riders went out to finish their last tricks and wrap up the show while I put my leg into the ice bucket. I was okay, I just wasn’t sure what had happened but it was killing. I waited a bit to see how it would feel after 30 to 45 minutes. Then since only one show was left we decided to drop me off at the hospital while they finished the last show so that I would be done about the same time that they were done and we could drive the two hours back home. It turns out I did indeed break my lower leg, I spiral cracked my fibula in half. The next two hours driving home was the most painful thing ever. Every little bump. Thank you Jeff, AJ, and all of my friends that was there doing doing the shows. I’m finally back home and I will have surgery in the next week here. Wish me luck!