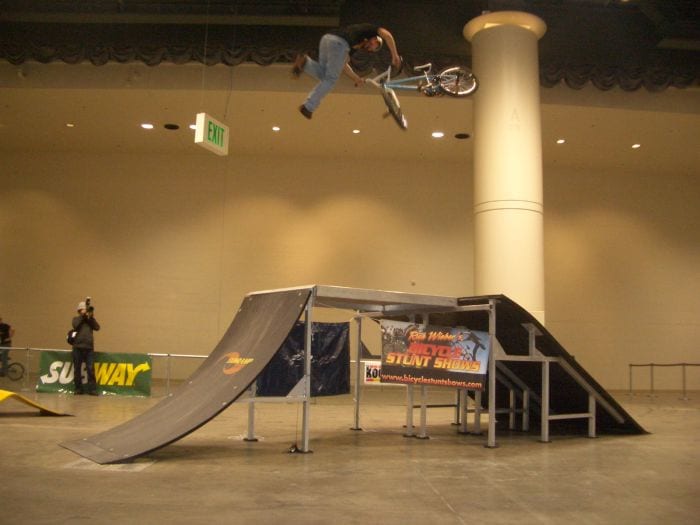 Minneapolis Convention Center – This was the second year of this event, and it seems to be growing. We had the same setup as last year with even more tricks. Nick, Bob, and I did 9 shows throughout Saturday and Sunday. At one point we were doing a train where all of us jump right after each other, and I ended up almost landing on top of Bob after he went down on a tail whip and I was right behind him with a double tail whip… It was awesome.

I was also live on Kool 108 talking about our bike shows and my awesome InterBMX.com website. It is awesome, really. Then we brought the radio DJ over on top of our ramp and I did a frontflip over him. He was pretty psyched. I also won a round of “Minnesota Cyclist of the Year” where I had to ride a road bike on a trainer for 1 kilometer, change a flat 700c tire, and do 3 laps on a little scooter bike thing. Then I was disqualified cause I was a “Pro BMXer” although Derrick who won was much more of a Pro than I was… He won a brand new Scott road bike. Overall, great weekend! Special thanks to Rich, Kenny, and the girlfriends 🙂 Check it out next year, we’ll be there.