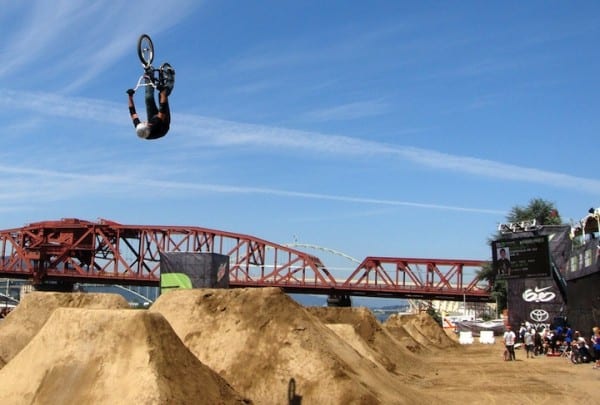 TJ Lavin is designing all of the dirt courses this year, with a bit of trail style mixed in.. Time to start hitting up the race track!! My roommate Evan Moyle & Jeff Mclearen flew out for the week (bless their little hearts), none of us had ever been to Portland.. It was incredible, the town was awesome. We flew in, took a train downtown, cross the road to our hotel, and Dew Tour was 2 blocks away.

Didn’t have to rent a car or anything for transportation. That train was so convenient. So were all the bums, good lord you can’t walk anywhere without being mugged. Portland is 1 of 7 cities total where their Denny’s can not stay open 24/7 because of the loitering bums. They literally sleep back to back on some roads, literally across the road from all the bars. It’s soooo wild.

More strip clubs per capita than any other city as well. Good lord. Dante’s Inferno on Sunday night is by far on of the most entertaining shows I’ve ever seen (Yes I’m comparing this to the Bellagio “O” Cirque du Soleil in Las Vegas and the Moulin Rouge in Paris), $8 cover for mimes, girls, fire, etc. Entertained for I swear it was 3 hours long. Wow.

Anyways Dew Tour. Quite a bit of controversy about the dirt & park courses this stop. I rode decent, I believe only 8 of 50 qualify to ride prelims, needa work even harder for next year !! Lots of fun riding with everyone. Watching finals was wild.

We also met up with our old roommate Calvin Burgstahler who recently moved to Portland, as well as Alex Mehl who I used to work with back in the day at QBP! Definitely hope to return to portland in the near future…

BTW we were at Red Robin and on the news they covered a bit of Dew Tour but called it “Dude Tour” literally spelled out in the captions. Ain’t too far from the truth !!

Here’s a quick overview on the dirt course from Berkheimer… BTW these sets are HUGE. The long & low setup jump just for the last set was 24 feet. That big transfer was about 30 feet…